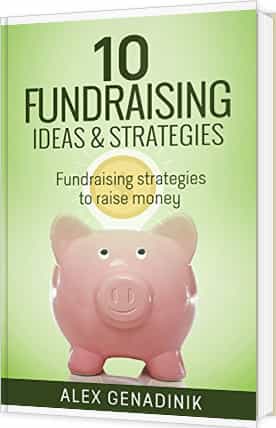 Raising money is almost always very difficult. In fact, it is one of the most difficult business challenges that entrepreneurs tend to face. In this article we will outline some of the things you can do to raise the money you need for your business.


First, get a good sense of different types of investments and ways to fund your project whether it is a nonprofit, or a for profit business. Keep in mind, funding your company is almost always difficult. It almost always requires a sustained effort over a number of months, and quite often takes resources away from running the actual business.


There are many options to help you fund your company. In this article we will go over pros and cons of many of the possibilities.

Unfortunately, most companies never raise money, get loans, or grants. While there is quite a bit of money out there help entrepreneurs, it is still a small fraction of what all entrepreneurs would want. Many institutions set aside money to boost small business. Such institutions are investors, banks, or government agencies. While these institutions are literally in place to give people money, they can't give to everyone. Usually they choose the cream of the crop businesses and entrepreneurs because they don't want inexperienced entrepreneurs squandering their money.

If you are a relatively new entrepreneur, you probably need their money the most. But you are probably least likely to get it because banks, investors and government agencies are not charities. They don't give money based on your desires to get it. They give money based on the likelihood of you turning that money into more money or a business that benefits a greater community.

Additionally, most early-stage businesses are simply not a fit to get most bank loans, government grants, or investments from professional investors.


So keep in mind that there is some risk involved in trying to raise money. You are risking time and resources which can often equate to money spent.

Avoid Or Hold Off Fundraising As Long As Possible

As previously mentioned, focusing on raising money will take resources away from your efforts. Those resources could have otherwise been used to improve product quality, marketing, sales, or any other task needed to grow the company.


Additionally, for many businesses, a plausible alternative path is to focus on product quality and sales/marketing so that the company can earn money from its revenue instead of taking outside money.

Cheap Ways To Fund Your Company

Many types of business require large amounts of money which is extremely difficult to raise. Sometimes that becomes a barrier to starting the company. In such cases it may be a good alternative to consider a different kind of a strategy where the business is cheaper to start.


For example, instead of a restaurant, it may be better to start with a food cart or truck. Or instead of having a gym or exercise studio, it may be simpler to start by partnering with a gym by taking advantage of their space. In case of complex website and online business ideas, it may be a better option to start with simpler ideas and work your way up. Whatever your business may be, try to think of alternatives that make financial sense.

Self-Funding As A Funding Option

If you can find an inexpensive strategy to get your business off the ground, self-funding becomes a viable option. Some of the best things to do is to save money by working in the industry in which you are looking to start your business because they will enable you to get paid to learn the industry.


Of course, putting your own money on the line is a big risk. But it can help you focus only on your business and allow you to remain independent of needing outside money, and to focus purely on running your business.

Many people want to raise money without almost any work. I hope you understand that you will have to work very hard to get money for your business from an investor or and outside source. Money never simply drops on your lap. So with that in mind, I want to offer you a video tutorial I made that has what you can call 50 fundraising ideas for you. These are not necessarily fundraising ideas, but they are ways to make money online. And if you bring the hustle, you can make money with these online strategies, and then put that money towards the funding of your business.

Funding From Your Own Revenue

One of the best ways to fund your company is through your own revenue. If you have a way to get revenue from clients, you can spend a part of that revenue trying to get more paying clients. Getting paying clients, and learning how to get more and more of them is precisely what can make your business sustainable. It is very difficult for a new business to make itself profitable from revenue in the early stages, but if you can, often it is the best route.

While it is good to focus on ways you can avoid raising money, there is definitely a time and place for taking outside funds to help your companies. The 4 typical ways of raising money are donations, grants, loans, or securing an investment.

There are a number of ways to raise donations. The newest and most popular approach is discussed in an article entirely devoted to the topic which is called crowdfunding. We have an article on this site about raising funds by collecting donations using various new crowdfunding sites like Kickstarter or Indiegogo.

Grants can be individual grants or government grants. This topic is more fully covered in a section of the app dedicated solely to grants. We have a full article on what types of organizations and even individuals are eligible for small business, nonprofit or individual grants.

Loans can be personal loans from friends or family, government loans, or bank loans. We discuss the topic in the loans section of this app. We have an entire article devoted to options of getting a small business loan. We have a full article on what types of organizations and even individuals are eligible for small business, nonprofit or individual grants.

Fundraising By Getting An Investment

Getting Creative In Your Fundraising Efforts

There are two types of events you can start to help you raise money. The first is a single fundraising event, and the second is an even series that is aimed to get you clients for your business, draw attention to your business, and also generate revenue by either charging people to attend the events or by selling something at the events.

I created a course that discusses fundraising ideas in more depth than my videos do. The course covers 15 fundraising ideas that range from standard strategies like loans, grants and investments, and go all the way down the scale to creative and very non-standard fundraising strategies like selling your hair. Some of the unique and creative strategies may seem to be a bit out there at first, but if you are an entrepreneur and you need to raise money for your business, you would be wise to consider all 15 of the strategies to make sure that you can raise as much money as possible for your business. Here is a full list of my online courses where you can also find the fundraising course.

I also wrote a book with the major fundraising ideas. I will be re-writing this book in 2017 and creating a second edition which will have more fundraising strategies that you can use. In the meantime, here is a link to all my business books to help you with various other parts of your business.

Raising money is very difficult. Let me rephrase that. Raising a reasonable amount of money can be attainable. But raising a significant sum of money is difficult. You need a professional approach to get investor meetings and to do well in those investor meetings. You need to understand how to get those meetings, how to position your business to look attractive to investors, and how to ask them for the right sum of money that will be agreeable to them. I can help you increase your chances of raising money by coaching you through various parts of the process. You can learn more about my coaching services on my business coaching page.